As we stood next to the Kastel fortress in Banja Luka, Republika Srpska, RS, a young Bosnian Serb musician from the town, Djurica Štula, told me he visits Sarajevo, a predominately Bosniak city, quite often but many of his friends wouldn’t dream of doing so.

“They say there are too many mosques there; the majority of people have Muslim names; and the culture of those people is different from their own. Some people fear everything that is different from what they are used to,” he told me.

Djurica said he had heard people in Banja Luka say they would never go to Sarajevo if they didn’t have to, “Many of these people say Sarajevo disgusts them. They [have] unfounded prejudices.”

Amra Dragnic studies architecture in Sarajevo. She is a cheerful person, an animal rights activist and very liberal. She has traveled all over Europe, but has never been to Banja Luka.

“I do want to go there some day, but so far I haven’t had a reason or an opportunity to do that,” she said.

Amra is one of many young Bosnians who prefer to travel abroad than to other parts of Bosnia they know very little about.

While she herself strongly condemns prejudices Serbs, Croats and Bosniaks have towards each other, she is aware that such attitudes are part of Bosnia’s reality.

She lowers her voice as she tells me a story about her acquaintance, a musician from RS, who did not want to come and play in Sarajevo because he believed it would not be appropriate for him to perform in “a Muslim city”.

In 1995, the Dayton peace agreement ended Bosnia’s war, but it also created two semi-autonomous entities: the Federation and RS, with special status given to the district of Brcko. While there is no official border between the two entities, they pretty much function as autonomous states, with parallel judiciaries, governments and parliaments.

As the time goes by, it seems that the gulf between RS and the Federation only widens, despite all the efforts invested by the international community and non-governmental organisations in bridging the divide.

As a consequence, a generation of Bosnians born shortly before and after the war know very little about life in each other’s entities and often fear crossing entity borders because of the prejudices they’ve absorbed from their parents and local media.

“We do not move around or travel a lot. We have lived in isolated societies for about twenty years,” Robert Jandric from Mostar said. “Divided along ethnic and entity lines, people are becoming more isolated every day and losing interest in seeing what is outside their own neighbourhoods.”

Jasmina Nakić, a philosophy student from the Federation city of Tuzla, says she neither has the money nor feels the urge to go to other Bosnian towns, especially those in RS. She admits that her view of life in RS is based entirely on media reports and what she hears from people who’ve travelled there.

“I heard that people in Banja Luka live much better than we do, that [RS president Milorad] Dodik rebuilt their towns; that night life is great and that they all have enough money. I heard they adore Dodik,” she said.

Dodik has been repeatedly criticised by the international community and Federation politicians for his secessionist ambitions and attempts to increase entity powers.

Observers fear that sooner or later RS will try to secede and that entity borders will become state borders, separating the two entities for good.

Political tensions and increased divisions between the Federation and RS have taken their toll on the younger generation, Djurica says.

“Because they are being isolated in their respective entities, young people don’t have an objective picture of how their peers live in other towns, especially [across entity borders]. We simply base our opinion on what media tell us and what we hear from others,” he said.

As I walk down the streets of Banja Luka with Dejan Matijevic, a philosophy student and human rights activist, I ask him whether he knows where the RS border is. Apart from a few odd sign posts, there’s nothing to indicate where one entity ends and another begins.

“When I am traveling with my father in the car, he always puts his seat-belt on when we cross into the Federation. That’s because the police are stricter there than in RS and he would have to a pay a fine. That is how I know that we have crossed the entity border,” he said.

Dejan tells me that his friends in Banja Luka have a very negative attitude towards Sarajevo, which mainly stems from their lack of information about the city. He himself has been there a number of times for work and has never had any problems.

“[My friends] cannot understand how I can summon the courage and spend a night at a Bosniak’s house, without fearing for my life,” he said.

According to Dejan, the recent war has caused people to withdraw into their own close circle of friends and resist experiencing anything beyond that.

“It often happens that people judge others unfairly. They just make up their mind about someone and refuse to change, because it’s easier for them that way. That’s how people function,” he said. 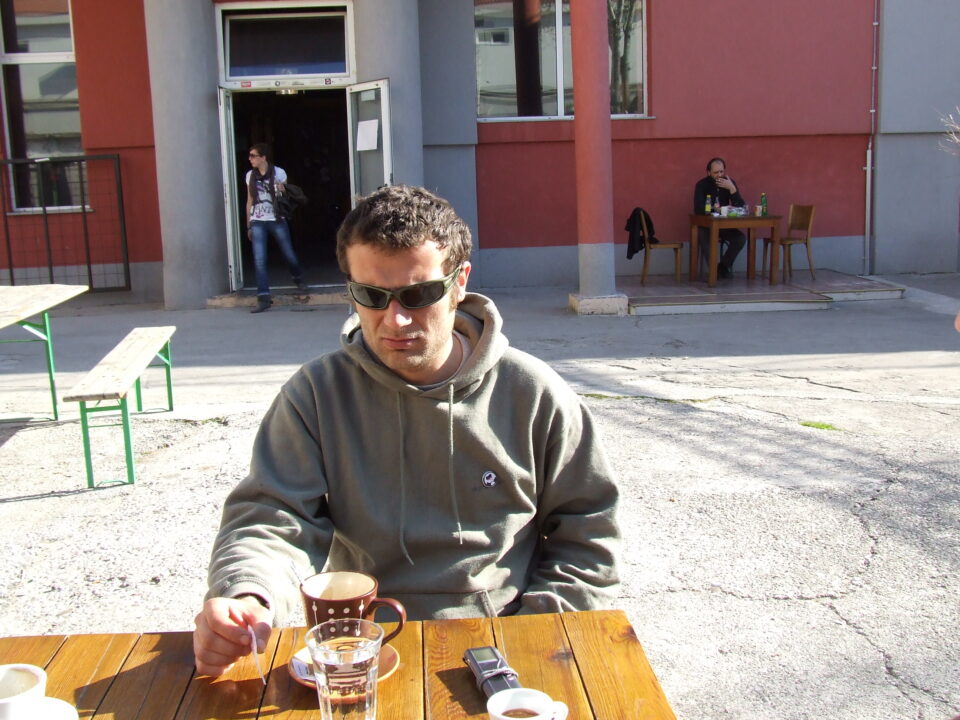 “People feel threatened by the unknown. This is primarily because they could not travel when they needed to most, when they were growing up. [Now their] prejudices about others prevent them from traveling around Bosnia. It does not necessarily have to be hatred, simply fear of the unknown,” he said.

Robert adds that the key to overcoming these prejudices is bringing young people from all ethnic groups together and organising joint activities in which they would enjoy and get to know each other better.

“I believe we really need such projects. Children from both entities should be sent to summer camps to participate in joint projects. In fact, we should send all our politicians to a summer camp for a few months,” he added, laughing.

He said the summer camps for children of all ethnic backgrounds he’d seen in Bratunac and Srebrenica in eastern Bosnia were a real success.

“For the first few hours, there was silence. But as the day progressed, the more relaxed the children became in each other’s company. By the evening, some of them were already in love, usually with kids of different ethnic background,” he said.

According to Djurica from Banja Luka, youngsters who have had positive experiences with those from other ethnic groups should share those experiences with as many people as they can, because that too might change prejudices.

Amra believes that a strategy for bridging the divide between the youth from the two entities could be very simple, if only there was the political will to implement it.

“Schools should send children on trips all over Bosnia, as part of the school programme. That way they would get to know their own country better, but also children in other parts of the country. However, I don’t think the local authorities would embrace this idea, because they build their power on divisions. The more we are divided, the stronger they become.”

Ajdin Kamber contributed to this report.