“When one sees what a human hand and a human mind is capable of doing to another human being, one becomes speechless,” said Mirsad Duratovic, a survivor of the Bosnia’s wartime detention centres, as he stood, visibly shaken, on the grounds of the memorial centre in Dachau, the Nazi-era concentration camp. 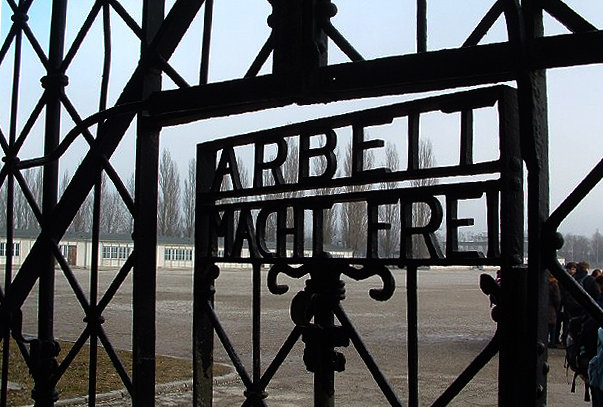 Duratovic, the president of Prijedor 92, an organisation of ex-detainees campaigning to build memorials at the site of former prison camps in Bosnia, was among a group of survivors from the Prijedor sites and the Srebrenica massacre who visited Dachau last month.

The three-day trip, organised by Study Centre Max-Mannheimer in Dachau, in cooperation with Centre Andre Malraux in Sarajevo, offered an opportunity for the Bosnian survivors to see how memorials were built in other countries. They also held a number of meetings and round tables with Dachau survivors and German human rights activists to discuss problems related to building memorials at places of mass suffering.

In 1992, in the Bosnian Serb-administered camps of Omarska, Keraterm and Trnopolje near Prijedor, thousands of Bosniaks and Croats were held in inhumane conditions and many of them were tortured or killed. Crimes committed in there have featured in several trials at the Hague tribunal, and numerous witnesses have spoken about the horrors that took place. Yet, apart from a small plaque in Keraterm, these places are not marked in any way, due to resistance from the local Bosnian Serb authorities.

Duratovic said it was not easy being in Dachau, because it brought back memories of his own suffering. He was only 17 when he was arrested by Serb forces at the beginning of the 1992-95 war, and was held in Omarska and Trnopolje. Duratovic survived, but 15 members of his family disappeared or were killed.

The first Nazi concentration camp, founded in 1933, Dachau served as a prototype for later extermination sites, and many people from the Bosnian group were surprised to find out that Dachau only acquired a proper memorial centre in 1965, 20 years after the end of World War Two.

Over 200,000 prisoners from 30 countries were imprisoned there during the war. At least 30,000 were either murdered or died of illness, while a great number perished during the so-called death march of April 1945, when the Nazis decided to evacuate approximately 10,000 detainees and forced them to march 70 kilometres to the south of Munich.

At the entrance to the camp, imposing black iron gates are topped with the notorious inscription Arbeit macht frei (work sets you free). The vast camp is surrounded by barbed wire, which used to be electrified. Many of the prisoners’ barracks have been removed and only their foundations are still visible, although two have been preserved together with their stark interior and rows and rows of extremely narrow wooden bunk beds.

Passing by a board with the inscription Never Again, written in many languages, former prisoner Edin Ramulic noted a bitter irony.

“They said Never Again, and yet the same thing happened in our country and elsewhere in the world,” said the activist from the Izvor association, one of many struggling to build memorials at former camps in the Prijedor area.

Dachau prisoners lived in dire conditions. Their barracks were intended for 200 people, but at times housed as many as 2,000. Medical experiments carried out on prisoners included intentionally infecting them with malaria.

The Bosnian visitors and their German hosts entered a well-preserved crematorium and an adjoining gas chamber with fake showers and ventilation ducts. The Bosnian survivors stood in that room silently, some of them visibly moved. Duratovic shook his head in disbelief.

Two photos inside the memorial attracted the attention of the group. One showed German civilians, inhabitants of the town of Dachau, who were forced by allied troops to walk through the camp right after its liberation in 1945, past the piles of dead, deformed and intertwined bodies of prisoners.

“Do you really think people of Dachau did not know what was going on here?” a Bosnian survivor asked. “The same thing happened in our country – people living close to the prison camps or execution sites knew what was going on, but they played dumb.”

The other photo, taken secretly in the summer of 1944 by a Belgian prisoner, Jean Brichaux, shows the crematorium and its chimney, with smoke from burning bodies emerging from it.

After touring the Dachau memorial centre, the Bosnian guests and their German hosts participated in a number of meetings and round tables at which they exchanged experiences and discussed constructing memorials at former prison camps in Bosnia.

Ekkehard Knobloch, who initiated the campaign to build a memorial dedicated to the Dachau death march, said that memorials alone could not help people face their past and that it was important that they talk about the crimes that were committed.

“In 1989, people who had survived the horrors of Dachau started to return to this place,” he said. “ Although it was painful for them to talk about [their experiences], their accounts made these monuments become more than just concrete blocks. It was only then that this place gained authenticity.”

The former director of the Dachau memorial, Barbara Distel, agreed that encounters with survivors were an important reminder of past crimes, especially for young people.

Ervin Blazevic, from the Bosnian Optimisti association, said that although there were certain similarities between Dachau and the prison camps around Prijedor, the post-war situation in Bosnia was much more complex than that in Germany.

“There was no defeated side in Bosnia,” he said. “That is the main reason why it is so difficult to mark places where war crimes were committed on a large scale. Usually it’s the winner who sets the terms and has the power to impose memorials in the territories of those who were defeated in the war. We don’t have such a situation in Bosnia.”

In 1995, the Dayton Peace Agreement ended the Bosnia war, stopping the violence but dividing the country into two parts – the Serb Republika Srpska, RS, and the Bosniak Croat Federation. Authorities in both entities resist building memorials to victims who are not members of their own ethnic group.

Although many in Bosnia see Germany as an example of how a country should face up to its past and honour the victims of war crimes, this has not always been an easy process. The German hosts explained that 20 years passed before Dachau was turned into a proper memorial centre, and many locals still find it difficult to live in the nearby town.

“Many inhabitants of Dachau have a problem with the fact that a former concentration camp is in their neighborhood,” said Nicolas Moll, a historian with the Centre Malraux Sarajevo and one of the organisers of the study visit to Dachau. “It is a constant reminder for them of the horrors that were taking place behind these walls for 12 years and that the town and its population didn’t do anything to stop that.

“This is not a past that inhabitants of Dachau town can be proud of, and many of them would prefer to ignore this dark part of their history. Their problem is that nearly everybody in the world associates the name Dachau immediately and exclusively with a concentration camp, and not with the town itself.”

Edin Ramulic, an activist with Izvor, spent time in the Trnopolje in 1992. The rest of his family was killed in another camp.

“It is of crucial importance for memorials to be built in Prijedor, where these camps existed, so that local people would finally accept that crimes did happen,” he said. “Judgments rendered by the Hague tribunal and the Bosnian state court have not helped much – there is still complete denial in Prijedor that these crimes have ever taken place.”

Despite their eagerness to see memorials built in places of mass sufferings as soon as possible, the visitors from Bosnia said they had learned an important lesson in Dachau – that building memorials takes a long time, even in a less complex post-war situation than that of Bosnia.

“In Republika Srpska, we will have to overcome many problems before we manage to build proper memorials in the Prijedor area,” Blasevic said. “The exchange of experiences with our hosts in Dachau helped us better understand the process of creating memories and the time required for a nation to face its past and admit that crimes were committed.”

“I believe that we have to do all we can to remember the victims of war. We have to solve our problems and properly mark all places where people, especially civilians, suffered during the war,” Muhamed Durakovic, a survivor from Srebrenica, said. “The experience we are bringing from Dachau will help us focus on our goal”.

Duratovic said he was particularly impressed with the story of Dachau survivor Abba Naor, one of the hosts at the memorial centre.

“Mr Naor, who has devoted his entire life to the struggle against fascism and efforts to honour victims through this memorial, is 80 years old but full of energy,” he said. “Before meeting him, my biggest fear was that one day I’d get tired and eventually give up the idea of creating a memorial at Omarska, but after speaking to Mr Naor, I know that will not happen.”.